Sky high mountains, mist rolling in and out, shimmering streams, butterflies, rainbows every now and then, fresh juicy apples, thick jungle, the city of Thimphu at first sight would feel more like a fairy land you would have read in your favourite fantasy novel. 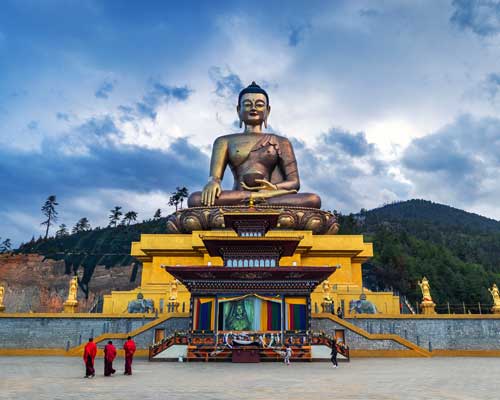 The crowned capital city of Bhutan, Thimphu is unlike any other modern city you have known. In spite of all the modernisation happening in the city, Thimphu has been successful in retaining their culture and most of all pollution is the last thing you will notice here. Fresh air, traditional architecture, disciplined traffic system and most of all smiling faces everywhere, all of which is very unlikely to be seen in any World capital cities. The most happening city in Bhutan reflects the traditional Bhutanese lifestyle in its monasteries, music, literature, dress code, architecture and people.

However, do not get fooled by the city’s rustic feel. Thimphu has almost everything you find in a new age city. Speciality restaurants, cafes, nightclubs, shopping malls and more, Thimphu has it all. The royal family of Bhutan lives in Thimphu along with 120,000 people who call the city their home.

A 4 day Thimphu Tshechu festival celebrated in September/October every year attracts tens of thousands of visitors from all around the World. This would be a great time for you to make a visit to experience its rich cultural heritage and at the same time its timeless natural beauty.

Glimpse of Land of Happiness

Experience the Land of Happiness