Bumthang is considered as the spiritual centre of Bhutan. The name itself refer to “the plain shaped like a bumpa”. Bumpa being a vase with a spout used for various Buddhist rituals and thus the name Bumthang. They say the roots of Buddhism in Bhutan grew from Bumthang Valleys. It was from here that Buddhism was spread to the other parts of Bhutan. You would literally feel the divinity when you set foot at the Bumthang Valley in Bhutan. The Buddhist chants from the monasteries nearby float through the thin air which invokes one’s spiritual side within. 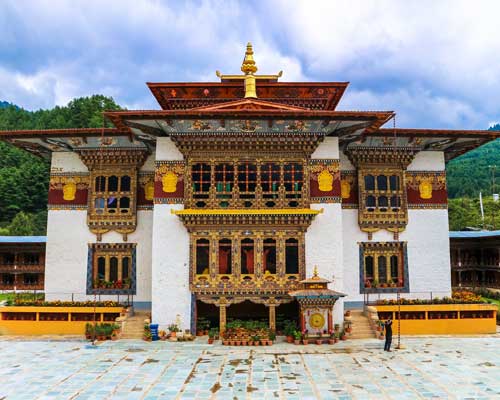 This gorgeous valley has a lot of legendary stories to tell which include the glorious tales of the Guru Rimpoche himself, the one who introduced Buddhism in Bhutan. Numerous temples and monasteries dot this beautiful piece of land. Some are more than a thousand years old.

Speaking about the landscape, the scenic valleys of Bumthang are better seen than said. Choekhor, the largest among the 4 primary valleys of Bumthang is the most beautiful and attracts travellers from all across the globe. Its relatively gentle terrain makes a perfect setting for short nature hikes. A stroll along the tranquil hamlets of Bumthang is another exciting way to explore the Bumthang Valley. Rice fields, potato farms, apple orchards, dairy farms and most of all, the ever welcoming people, you just cannot escape Bumthang with its captivating atmosphere.

Glimpse of Land of Happiness

Experience the Land of Happiness